Historians have known about the weirdness in the dating of David II's charters and letters for a long time. In 1899, Archibald Dunbar noted the following in his reference work Scottish Kings:

"The above dates are correct, but from some unexplained cause the charters granted by King David II, from the 24th year to the 42nd year inclusive, are dated one regnal year short of the truth. Therefore, to find the correct date, it is necessary to add one to any regnal year that dates a charter of King David II after the 6th of June 1352. The question - which year was made 24 months long? - is still (1898) undetermined." (Dunbar, Scottish Kings, 157, n. 58). 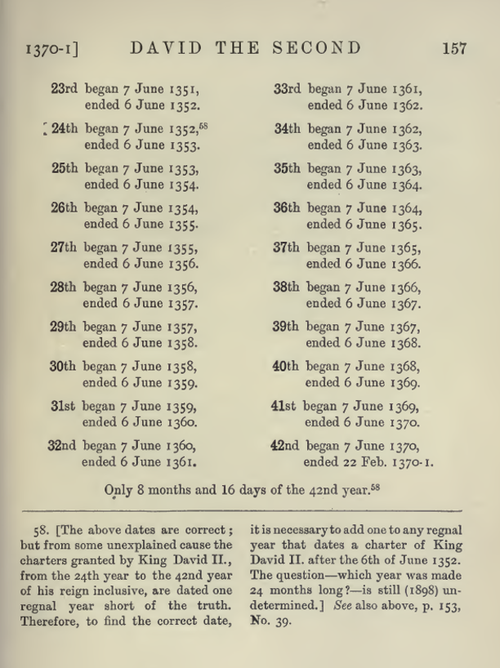 When historian Bruce Webster came to edit and publish the acts of David II, which came out as Regesta Regum Scottorum, volume VI, in 1982, he was of course aware of this unusual situation with the dating of David's acts. Webster noted the following in his introduction:

"There is however one particular anomaly. From at latest 10 October 1353 until the end of the reign, all regnal years are one less than they should be mathematically. The fact is beyond question. I have noted 22 texts which bear both a regnal year and evidence of the year AD [documents numbers listed] and every one confirms this strange pattern. Yet although the fact has been recognised for more than two hundred years, no convincing explanation has ever been advanced, and none is offered now." (Webster, RRS, vi, 9).

In a truly remarkable piece of scholarship undertaken by Archibald A. M. Duncan and published as 'The Regnal Year of David II' in the Scottish Historical Review in 1989 (volume 68), at last some clarity was brought to this thorny issue. Through a combination of the analysis of palaeography (handwriting), sigillography (sealing technique) and a careful reconstruction of the events of the 1350s, Duncan was able to present a convincing way through what proved to be a complicated morass. 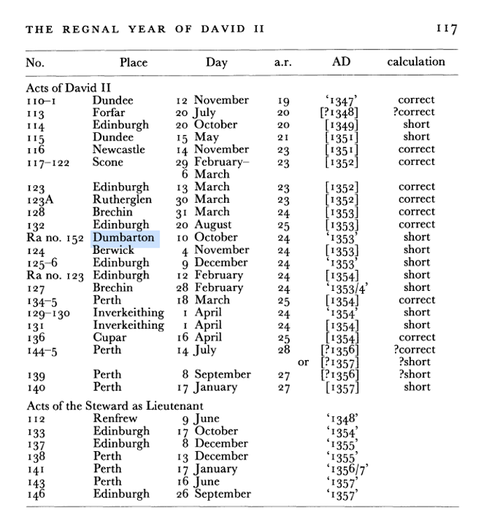 What Duncan realised was that the situation was unfortunately not as simple as noting that at mistake was made around October 1353 in calculating the year, which was then carried on for the rest of the reign. Instead, he noted that "the period during which the regnal year was first miscalculated lies between 12 November 'a.r. 19, 1347' ([RRS, vi,] no. 110) and 10 October 'a.r. 24, 1353', correctly a.r. 25 (Ra [i.e., RMS, i, app. 1] no. 152)." (Duncan, 'Regnal Year', 106). Acts of David II had been calculated correctly up to his capture at the battle of Neville's Cross on 17 Oct. 1346, where the chancellor and chamberlain were killed. The next two documents (RRS, vi, nos. 110, 111) written in the king's name which also survive as contemporary single sheets are both dated at Dundee on 12 November, regnal year 19, which correctly points us to the year 1347, about a year after the Neville's Cross disaster. These were written by Webster's Scribe VII, whom Duncan has identified as Robert Dumbarton, the royal clerk of the rolls. While David II was in English captivity at the time, the documents, which dealt with trade issues, were written in the king's name and sealed with the great seal, with one of them (no. 111) describing the political event that spawned them as 'our council'.

Perhaps unsurprisingly, there were very few royal charters and letters produced in this period. Probably the first surviving text to use the incorrect, short, dating of the regnal year was RRS, vi, no. 114, which was also penned by Robert Dumbarton, according to Duncan's analysis. The document, dated at Edinburgh on 20 October, regnal year 20, ought to date to 1348 (instead of the true date of 1349), when the beneficiary and probably the scribe were in London at that time, rather than Edinburgh. There was also a parliament held at Dundee in May in the king's regnal year 21. A charter in the king's name (RRS, vi, no. 115) was produced there, alongside some non-royal charters, and all written again by Robert Dumbarton, as Duncan shows. Duncan argues convincingly that this charter follows the short calculation of the regnal year, putting it in May 1351. Duncan poses an important question on page 119: "why did it come about and why was it persisted in?". Because the short calculation was also used in letters patent under the signet seal that Dumbarton did not write (RRS, vi, no. 124), "it does suggest very strongly that the king had committed himself in captivity to the short calculation", arising "during the years of straitest captivity, 1346-49". He added, "it seems to me most likely that the origins of the short calculation lay in a few lost private letters by King David, wrongly dated, and in a stubborn royal temperament".

"It seems to me most likely that the origins of the short calculation lay in a few lost private letters by King David, wrongly dated, and in a stubborn royal temperament."

King David was permitted to return to Scotland in November 1351 to try to gain political support there for his ransoming. A parliament was evidently held at Scone in late February and early March of 1352 to tackle the issue. The six royal acts (nos. 117-122) produced there were all dated using the correct measurement, in regnal year 23. These were all produced either personally by or under the eye of the new chancellor, Master William Caldwell. After the king's return to England in April 1352, Bishop Patrick of Leuchars took over as chancellor. Patrick had been in Avignon securing papal confirmation of his episcopate during David's return to Scotland, but was himself back in Scotland by 31 March 1353, where he produced a royal charter in his own cathedral city of Brechin (RRS, vi, no. 128). He was also chancellor in December 1353 in Edinburgh (RRS, vi, no. 125). Duncan has shown that these charters were dated according to the correct calculation, not the short one. So, to sum up so far, the short calculation arose sometime during David's captivity, between 1346 and 1349, and was employed by the king's clerk Robert Dumbarton in the period of 1349 to 1351. The new chancellors William Caldwell and Bishop Patrick steered the course back to the correct calculation in 1352 and 1353. So how did later acts of David end up using the short calculation, especially given that Bishop Patrick was chancellor for most of that time?

"The short dating triumphed [...] not because the error was unknown or had defied correction, but because the king, its originator, was committed to it."

There was a return from the correct to the short calculation between 20 August 1353 at Edinburgh and 10 October 1353 at Dumbarton. The clerk Robert Dumbarton seems to have taken up production of royal documents again at this time and, perhaps under the king's personal direction, went back to the short calculation! This is despite the fact that Bishop Patrick was still chancellor, at least up to 9 December 1353 (RRS, vi, no. 125). That the king may have been unhappy with Patrick might be reflected in his stepping down from the chancellorship by 28 February 1354 (RRS, vi, no. 127). Robert Dumbarton wrote the royal documents emanating from a king's council (absent the king) held at Inverkeithing on 1 April 1354, which attempted to steer through David's release. While Robert continued in his use of the short, incorrect, calculation of the regnal year, he now paired it with the AD year so as to avoid confusion (RRS, vi, nos. 129 and 130; see also 131).

There seems to have been an active debate at this time about which calculation to use. While Robert had been using the short calculation from 10 October 1353, when the AD year was first paired up with the short calculation, other scribes were still trying to use the correct dating method! This is noteworthy for two charters produced at Perth on 18 March 1354, dated (probably) correctly as the 25th regnal year (RRS, vi, nos. 135, 136), which were penned by an unidentified Scribe IX. It also seems to be the case with a document of 16 April regnal year 25 (1354) at Cupar in Fife, which Duncan attributes to Caldwell. So the sometime chancellors, William Caldwell and Bishop Patrick of Brechin insisted on using the correct dating, but Robert Dumbarton was convinced, presumably by the king himself, to follow the short calculation, although he sought to find a way through the confusion by also including the AD date. Unfortunately, little is known about the situation between summer 1354 and the king's release late in 1357. Robert Stewart was certainly acting as the king's lieutenant during this time. Upon the king's return, Robert Dumbarton continued to produce letters and charters for the king, now as Webster's Scribe XII, scribe of six acts between November 1357 and March 1358 (RRS, vi, nos. 151, 153, 162, 163, 169, 176). Robert continued to work in the king's service and probably died in 1360 or 1361. Bishop Patrick was reappointed chancellor when the king returned in November 1357, but his appointment was clearly predicated upon accepting the incorrect, short, dating method. As Duncan concludes, "the short dating triumphed ... not because the error was unknown or had defied correction, but because the king, its originator, was committed to it". (p. 119)

Changes have been made to the dates and H-numbers of the relevant documents in the PoMS database, which are now visible publicly. The table below shows the order of the documents and the changes that have been made.