*Note: this piece has been edited and updated to reflect the new developments outlined in post 2: 'Robert I's missing charters'.

The acta of Robert I, king of Scots (1306-29), were edited by Archibald A. M. Duncan and published in 1988 as volume five of the long-running Regesta Regum Scottorum series of Scottish royal charters (for this reason it is referenced as RRS, v). [1] From its inception, the vision for the Regesta series was ‘to publish the written acts of the sovereigns of Scotland before the return of James I from captivity (in 1406), other than those already printed in full in Early Scottish Charters and in the first volume of the Registrum Magni Sigilli Regum Scotorum’.[2] In Duncan’s volume of Robert’s acts, he gives us numbered texts for 416 documents, some incomplete (of which 383 were dated and a further 33 were undated). 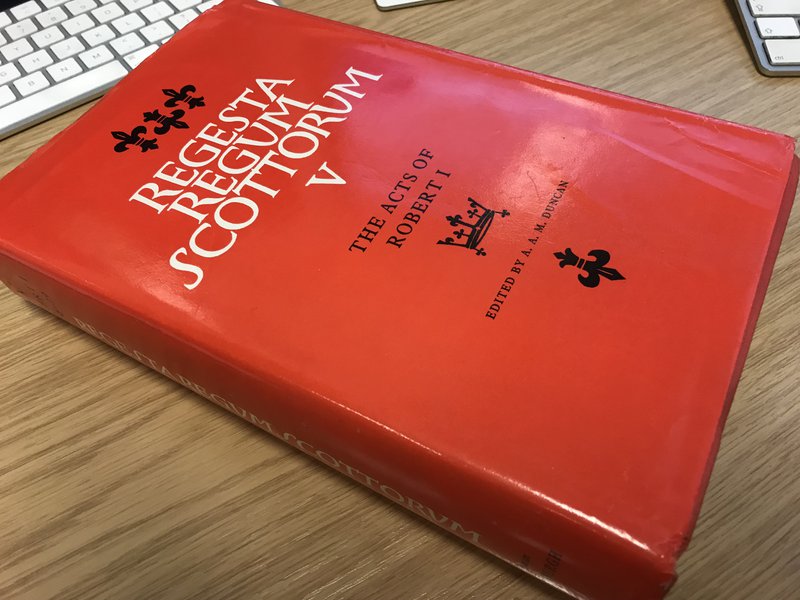 This does not, however, constitute the entirety of King Robert’s surviving written acta. While this was not an issue for the People of Medieval Scotland database when dealing with earlier kings, with the post-1314 Robert I, we enter RMS territory, and that makes things a little more complicated. RMS includes texts of documents copied down as part of governmental administrative procedures into parchment rolls or books called registers. Data from all of King Robert’s extant acts which are mentioned explicitly by Duncan in RRS, v, have now been entered into the PoMS database and can be accessed publicly (as of Sept. 2018). We can see there that the ‘H-number’ series for King Robert I, beginning 1/53/, runs up to 1/53/438.[3] Thirty-six texts from which data was entered were not printed by Duncan because they appear in full in the Register of the Great Seal –known as RMS.[4] Duncan included a short note for each of these documents at the appropriate chronological point in the series, but gave no details about the people or places in these texts. As we shall see in the next post, however, these 36 texts which Duncan explicitly noted constitute only a portion of the body of Robert I charters printed in RMS, i.

The Register of the Great Seal (RMS) is the name given to a series of medieval parchment rolls and books into which were copied the more formal royal charters that had been issued with the great seal of the kingdom. The earliest such surviving roll begins in 1315 and includes a variety of charters, mostly to lay beneficiaries, produced over the following five or six years. The contents of these registers was edited and published in 11 volumes between 1882 and 1914, mostly under the auspices of John Maitland Thomson.[5] The first volume (1912), printing twelve rolls and one book covering 1315 to 1424, was an updating of an earlier 1814 edition by Thomas Thomson[6], incorporating also two indices cataloguing hundreds of (mostly lost) acts of Robert I and David II (1329-71) from some 82 rolls. Much of this was lost in a shipwreck in 1660. Only one roll, 6.09m long with twelve membranes, with the texts of 96 documents, survives intact from the reign of King Robert I: this is known as ‘Roll IV’.[7] 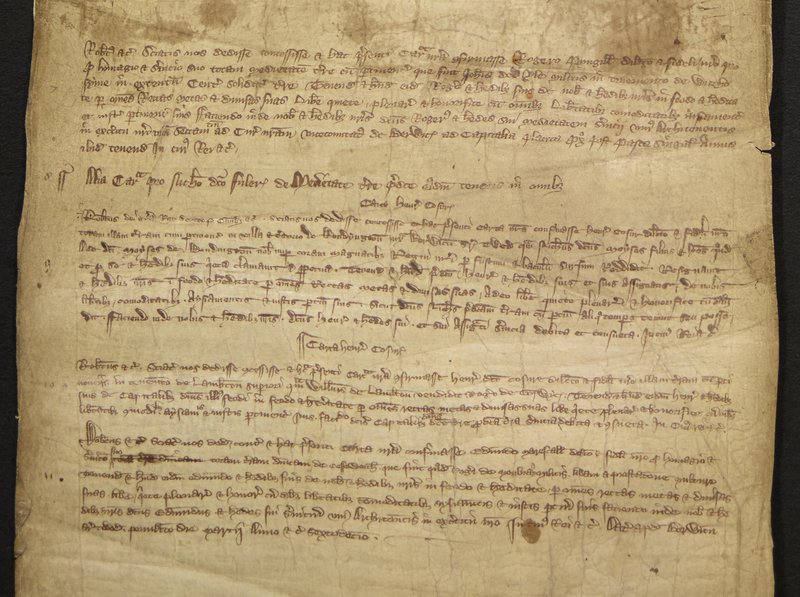 Some of the texts copied on this surviving Robert I roll also survive elsewhere in fuller form. Nearly all of the thirty-six dated RMS texts which Duncan noted chronologically within the main body of his edition are to be found not in the surviving roll (known as Roll IV) but instead printed in Appendix One to RMS, i, where a further 109 Robert I texts are to be found. This comprises copies made in the early seventeenth century from the other lost rolls of Robert’s reign. Rarely did the clerks who produced Roll IV bother to copy the dating clause, which is why Duncan did reference them explicitly. Further, enrolled charter texts seldom include the witness list, which is the source of most of the names to be found in PoMS. These undated charters will be entered as a second series of Robert I charters in PoMS, but are not among the 438 texts mentioned above. These ‘missing’ Robert I charters will be the subject of further posts on the website.

What is more, it is possible to gain some sense of the totality of the enrolled charter material that was lost in 1660 through indices of their contents which had been made before the rolls were lost. These indices, which are printed in RMS, i, Appendix 2, allow us to compare Robert's entire documentary output. For the first time in Scottish medieval history, we can view a 'central record' (albeit imperfectly preserved) against those charters and letters of a Scottish king which have survived in original form or in cartulary copies or antiquarian transcripts. This will form a topic of research later in the COTR project.