What times of the year did Scottish kings produce the most documents?

Now that we have entered all the Scottish royal documents into the People of Medieval Scotland database up to the death of David II in 1371, we can start to ask interesting new questions of the material. If you have ever wondered which times of the years saw the production of more royal documents, we can now provide the answer to that question. For the first time, through the extraction of dating evidence from the PoMS database, we can aggregate the data for how many documents were dated on which days and months of the year, across several reigns. The earliest document from the dataset comes from 1194, when the clerks of royal documents first began giving a day of the month, although the exact regnal year was not added to this formula until 1222. The following charts and graphs illustrate the number of documents of all types, per month, across the last two decades of the reign of King William I (1194-1214) and the reigns of Alexander II (1214-49), Alexander III (1249-86), John (1292-96), Robert I (1306-29), David II (1329-71) and Edward Balliol acting as king of Scots (1332-56). 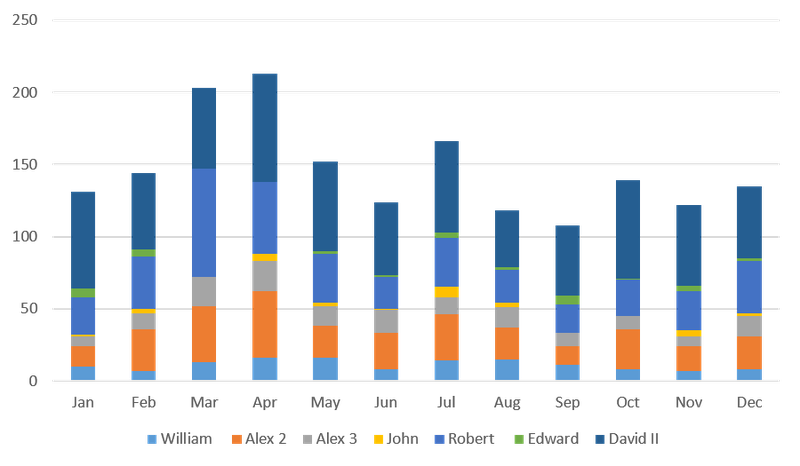 It is evident from the aggregation of data above that March and April were the most popular months for royal administration business. This is likely at least partially due to the importance of Easter courts, although this is hard to track with precision due to the fact that Easter is a moveable feast. 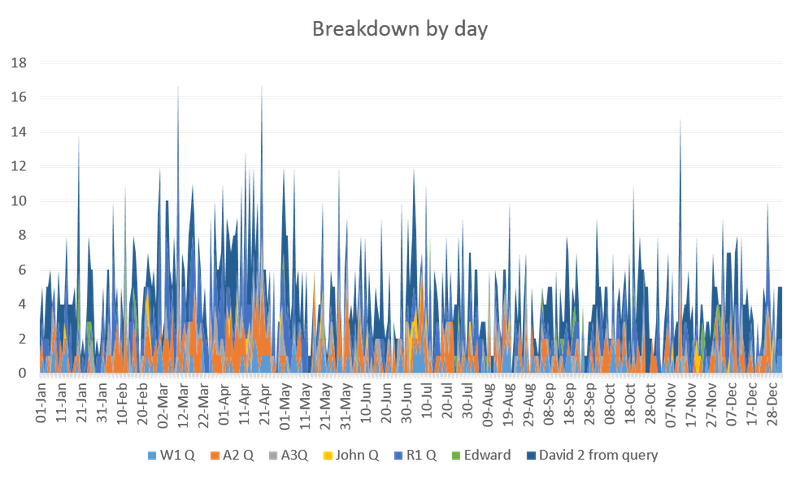 This graph shows the breakdown by day across the whole year. The only days to measure over fifteen documents were in March and April, but there were other particularly busy individual dates across the whole year. The busiest dates across the whole period were 10 March and 20 April, with 17 documents each (see table below). But the next busiest day was the 12 November. This last date was the day after Martinmas (11 Nov.), one of the two common annual dates when rents and renders were due. The PoMS database includes 493 transactions with dues on Martinmas. The other common day for renders was Pentecost or Whitsun, a moveable feast which falls fifty days after Easter, usually in May or June. Analysis of individual reigns strengthens the notion of spring being an important time of year for royal business: the most prolific days for Alexander II, Alexander III and Robert were all in March, while David’s busiest day is a tie between 14 April and 20 January. There were busy moments across the whole calendar year.

There were also no points at which business completely stopped. The only dates for which we have no documents are 19 February, 27 April, 30 May, 23 June, 29 June, 13 July, 21 August, 30 August, 24 September, 3 November, and 19 December. Analysis of the monthly output of each king, visible in the tables below, reveals a general pattern of slowdown in the winter, with December being the busiest winter month. This could be attributable to the importance of Christmas courts, but it is noteworthy that the December documents are spread out across the month. There also tends to be a drop-off after the high point of March and April, although the variations are certainly reflective of survival patterns. The aggregate analysis of all dated documents from 1194 to 1371, however, is the closest we can get to an accurate picture. 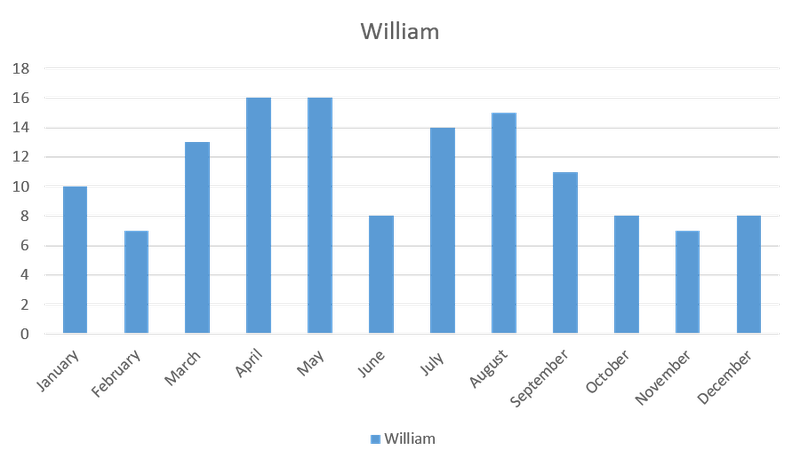 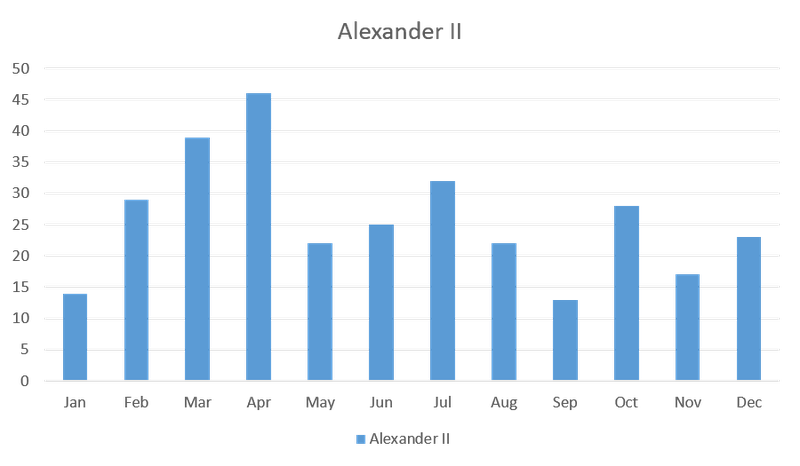 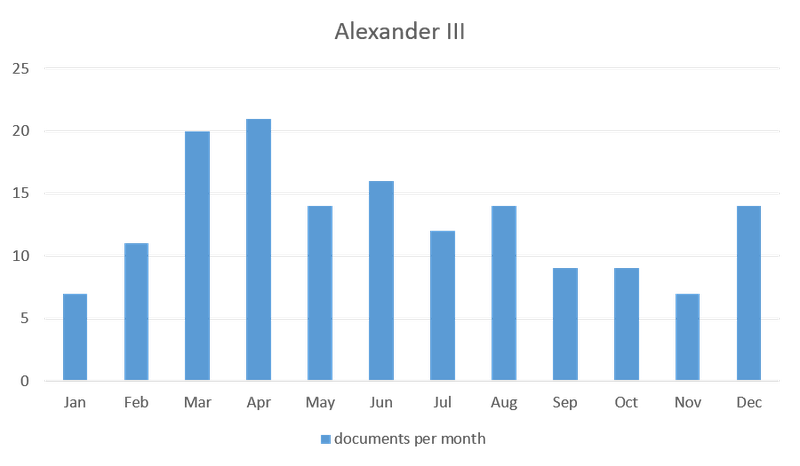 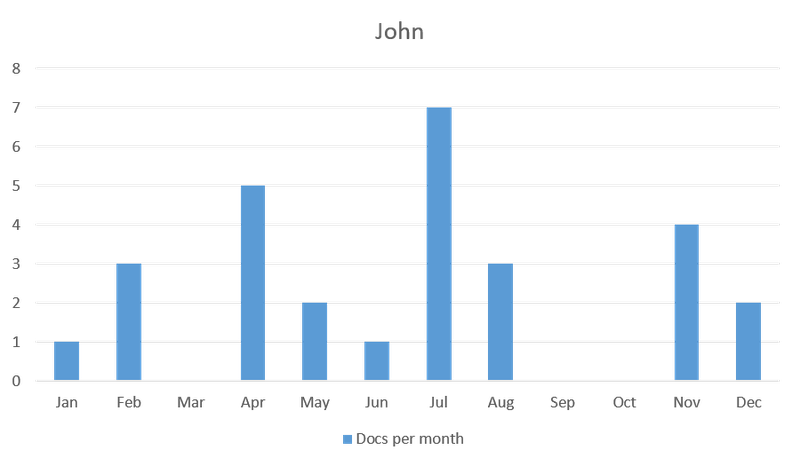 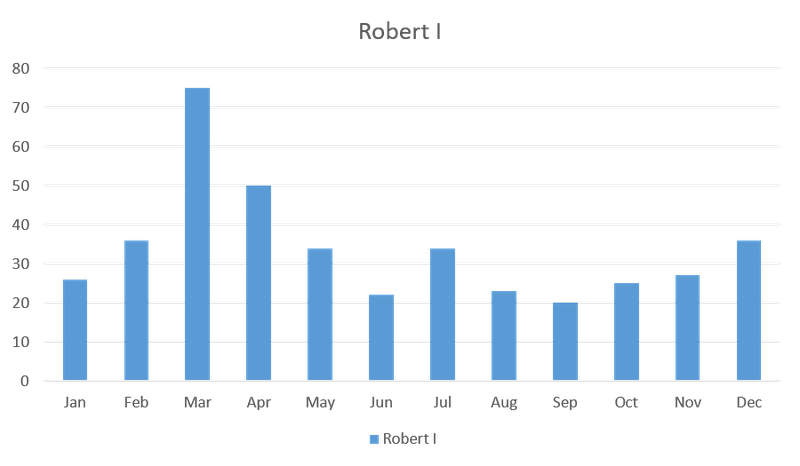 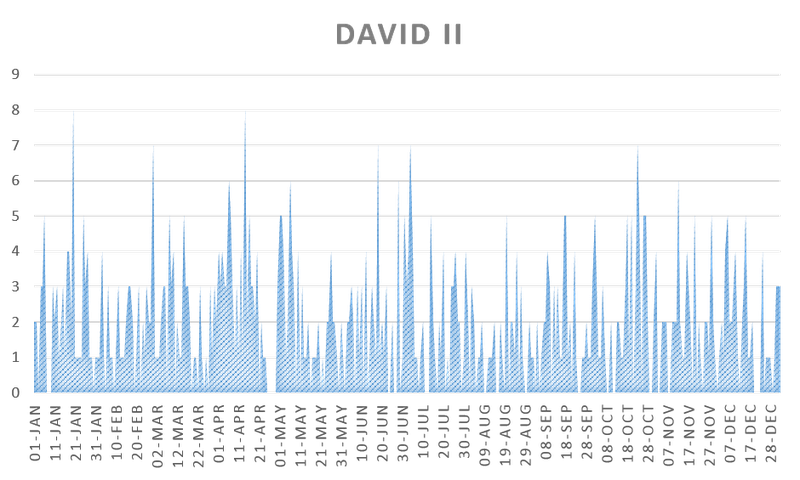