This page explains how to read and interpret the edition's manuscript-text view, with particular focus on how it represents settled and unsettled text. Further information can be found about settled/unsettled text here, and the detailed methodologies for the Declaration here and Regiam here.

Manuscript text is an abstracted transcription of the words and letter forms from a manuscript instantiating the work being edited.

These are represented by an alphabetic siglum (e.g. B or 'FA', followed by the modern shelfmark from the repository where the codex is now housed, and folio or page number where the work being edited is found).

You can view the transcription and translation of each manuscript-text in our text-viewer and compare them against one another.

To do this, go to Texts, and click on any of the manuscripts, listed according to version. 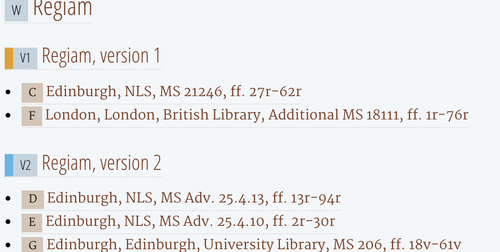 You can now see the MS-text of a particular copy of the Declaration of Arbroath. This is manuscript-text view.

How are settled and unsettled text defined in manuscript-text?

When you enter manuscript-text view, you will see that some text will be displayed with its background highlighted in grey:

One manuscript-text of a wholly hypothetical work called: 'A Day on the Computer' might read:

A second manuscript-text might render the same sentence as follows:

Both mean (roughly) the same thing, but with some differences that might (if the subject matter were different) be interesting.

Unsettled text in a manuscript-text therefore points the viewer's attention to the groups of graphemes and areas of text where other manuscripts of the same version contain a different reading or sense.

The first manuscript in our hypothetical 'day at the computer', therefore, would be rendered as follows:

The second manuscript would require slightly different information to be presented:

Bold [in the dynamic edition itself, words and symbols highlighted in 'grey'] highlights the viewers attention to the fact that other manuscripts of the same work have different graphic information in this location.

As stated in the introduction to the concept of dynamic editing itself, different works will require slightly different understandings of 'unsettled-ness'. For The Dynamic Edition of the Declaration of Arbroath, we refer you in detail to the editorial methodology and, in particular, this key phrase:

"Text is therefore regarded as ‘unsettled’ if the difference between what is found in one manuscript and another would be likely to alter the way a word is read or understood."

What does manuscript-text view allow you to see?

Manuscript-text view allows you to see the abstracted text of the work being edited from its manuscript instantiation.

It allows you to see immediately the areas of text which are different in other manuscripts of the same version ('areas of unsettled text').

It allows you to examine manuscript-text without making assumptions about the hierarchical relationship between different manuscripts (i.e. to avoid assuming that because one manuscript is later, it must contain a more corrupted text than an earlier manuscript).

The Dynamic Edition of the Declaration of Arbroath will also provide a 'supplementary' manuscript-text view which aims to add something different in order to capture more effectively what scribes were doing with the Latin graphemes they were confronted with in their exemplars. This exists as an addition to the dynamic edition. It will not display settled/unsettled text but, instead, provide a less standardised orthography than that in the dynamic edition. This is an editorial decision and is explained by Dauvit Broun here.

For a quick aide-memoire to the use of symbols in the dynamic edition, see our 'Dynamic Symbols: An Aide-Memoire' page.