The legal text at the heart of this project is Regiam Majestatem. Agreed to have been originally compiled under Robert I, one of its most influential commentators has viewed it as a work of 'political theology ... needed when a society's integrity was threatened' (Harding 1984). But in 1426, the newly-returned James I acknowledged its position as one of the ancient texts of Scottish law.

Yet Regiam is a remarkably understudied text. Neither of the two current editions of the Latin tractate (published in 1609 and 1844) even begin to represent its complex textual tradition accurately, which means that we currently have little way of understanding how existing law and practice were reformulated under Robert I. Nor do the issues end there. Preliminary work reveals that the surviving manuscript-texts of Regiam show considerable change in its structure and content across the late fourteenth to sixteenth centuries. Print editions can represent the earliest retrievable text, but are too inflexible to show at the same time how later emendations, additions and accretions changed a work's form and purpose. 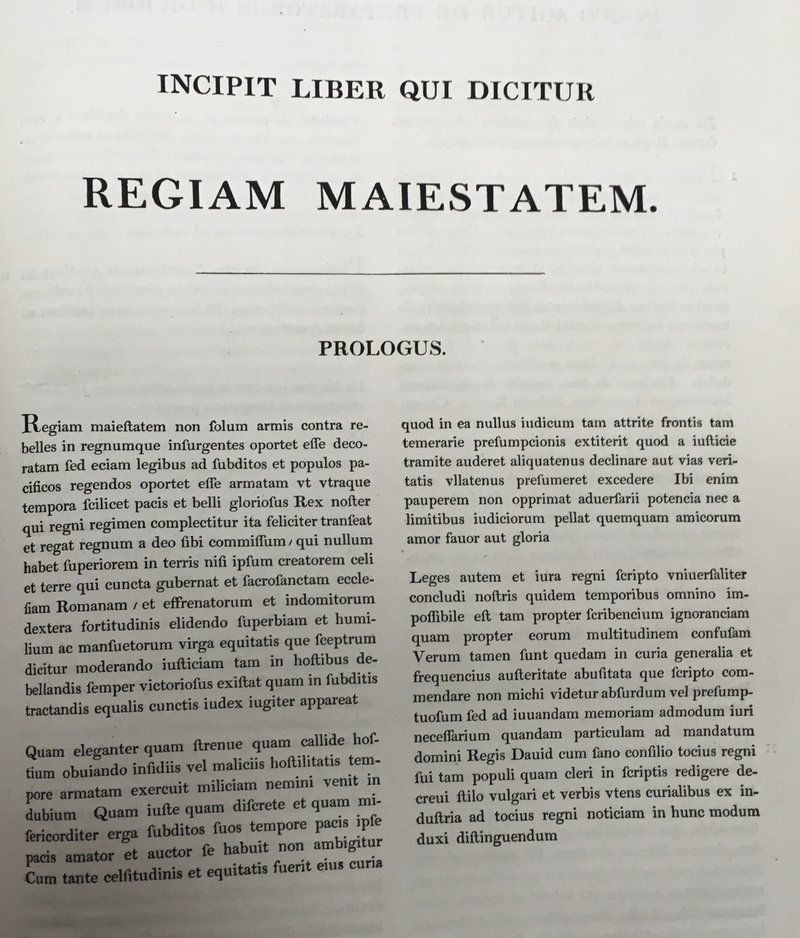 The first page of Thomson's 1844 edition of Regiam Maiestatem, published in volume 1 of The acts of the Parliaments of Scotland.

We aim to identify not only the earliest version of Regiam Majestatem but also, through our dynamic editions, to create new models for representing textual change. We will produce a print edition of the earliest known version of Regiam based on two manuscripts (in Edinburgh—National Library of Scotland MS 21246—and London—British Library Additional MS 18111). This version of Regiam has never been published before; the existence of the 'Additional' manuscript was only brought to historians' attention by the late A.A.M. Duncan in the 1960s.

But we will also model our concept of a dynamic edition on selections from Regiam Maiestatem, whose working processes took place over centuries, involving multiple anonymous individuals and scribes. The edition will thus represent visually all the major versions of Regiam as part of the same idea of a single work which is instantiated by multiple textual forms (for our concepts, see here). Modelling our dynamic edition of Regiam will hopefully pioneer a new form of digital edition to meet the challenges of working with works, like Regiam, which grow and develop over a long period of time.

How to cite: A. Taylor, 'Regiam Maiestatem: Scotland's ancient law', The Community of the Realm in Scotland, 1249-1424: history, law and charters in a recreated kingdom (King's Digital Lab, 2018), online at https://cotr.ac.uk/regiam