John Balliol, whose maternal grandmother was Margaret, daughter of Earl David of Huntingon and niece of King William I, was the winner of the Great Cause and declared heir to King Alexander III (d. 1286) and his granddaughter Margaret of Norway (d. 1290). John was inaugurated at Scone on St Andrews Day (30 Nov.), 1292, the last medieval king of Scotland to be enthroned on the stone there. John was only king for four years; after forming an alliance with France in February 1296, King Edward I invaded Scotland and stripped John of his insignia and title at Brechin on 10 July 1296. 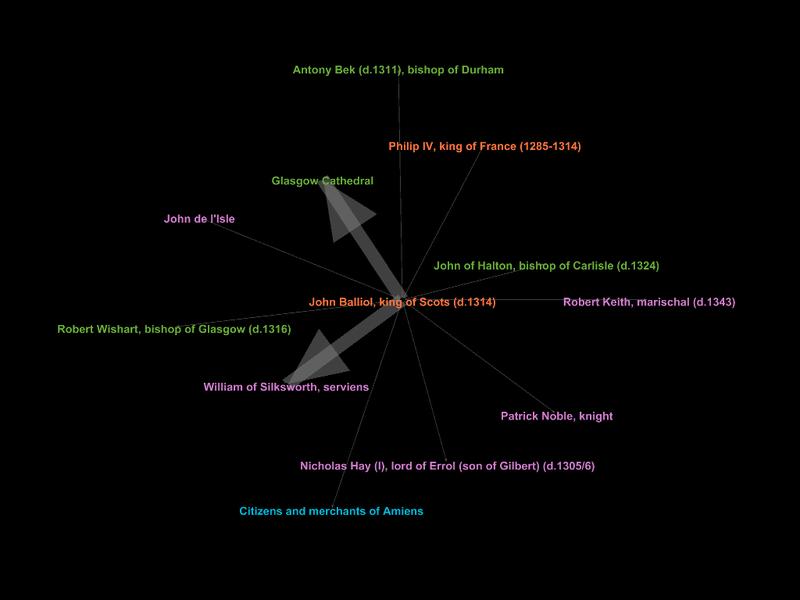 Table: beneficiaries of gifts and other transactions by King John

There are 10 witnessed charters of King John that comprise his network. 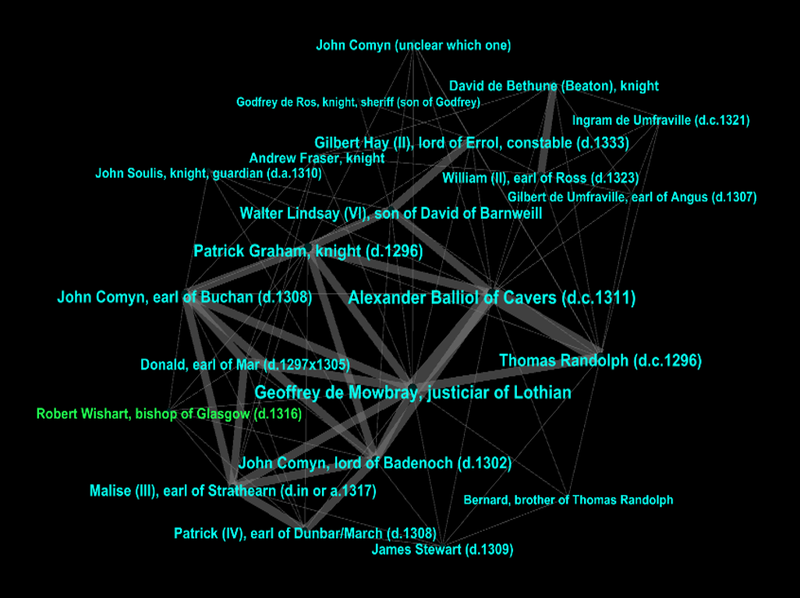 View the interactive graph of King John's witnesses on the People of Medieval Scotland website.

John Balliol's network of charter witnesses are a reflection in large part of the king's closest political allies and friends. A distant cousin, Alexander Balliol of Cavers, had been named chamberlain of Scotland shortly after King Alexander III's death and continued to fill that role under King John. His brother-in-law, John Comyn of Badenoch (d. 1302) was an important supporter, as was John Comyn, earl of Buchan. The justiciar of Lothian, Geoffrey de Mowbray, and the sometime sheriff of Stirling, Patrick Graham, as well as a former chamberlain Thomas Randolph (father of Robert Bruce's friend of the same name) were prominent at King John's court. James Stewart, the king's steward, appears toward the bottom of the league table, and none of the Bruces appear at all. The Umfravilles, represented by Earl Gilbert of Angus and Lord Ingram, had long-standing ties to both the Balliols and Comyns. The knight John Soulis, despite witnessing only one charter of King John's during his proper reign (1292-96), went on to be his chief representative in Scotland during his captivity and exile, even garnering the title 'guardian of Scotland' at John's behest in 1301. The fact that several earls witnessed his charters - including Buchan, Strathearn, Mar, Dunbar, Angus, and Ross, reflected the fact that much of his activity took place at parliaments, although, given this, that only one bishop appears is unusual and noteworthy.