CITE THIS PAGE: Matthew Hammond, 'Breaking down Robert's reign', The community of the realm in Scotland, 1249 -1424: History, law and charters in a recreated kingdom, 21 Nov. 2019, https://cotr.ac.uk/social-network-analysis-political-communities-and-social-networks/networks-robert-i-king-scots-1306-29/breaking-down-roberts-reign/

By dividing Robert's reign into shorter chronological periods, or time slices, we can understand better how his charter witness networks changed over time. Robert's reign has been broken down into six time slices. The first is eight years long, but only contains 23 witnessed documents, most of which date to the later part of this period as the royal bureaucracy got on its feet. The second slice marks the period between the victory at Bannockburn in 1314 and Robert's momentous Scone parliament in 1318; a short third period comprises the year and a half or so between then and the Declaration of Arbroath, including Abbot Bernard's 'writing up period' for five weeks or so at Arbroath after the Newbattle parliament or assembly at which the letter of the barons was drafted. The final three periods divide the 1320s into roughly equivalent three-year slices. The number of witnesses varies little throughout the reign. Despite the variation in document numbers from 23 to 58, the witness network ranges in size only between 36 and 42. Thus, while there were 99 witnesses in Robert's whole-reign network of charter witnesses, there were only 36-42 who were active at any given time. 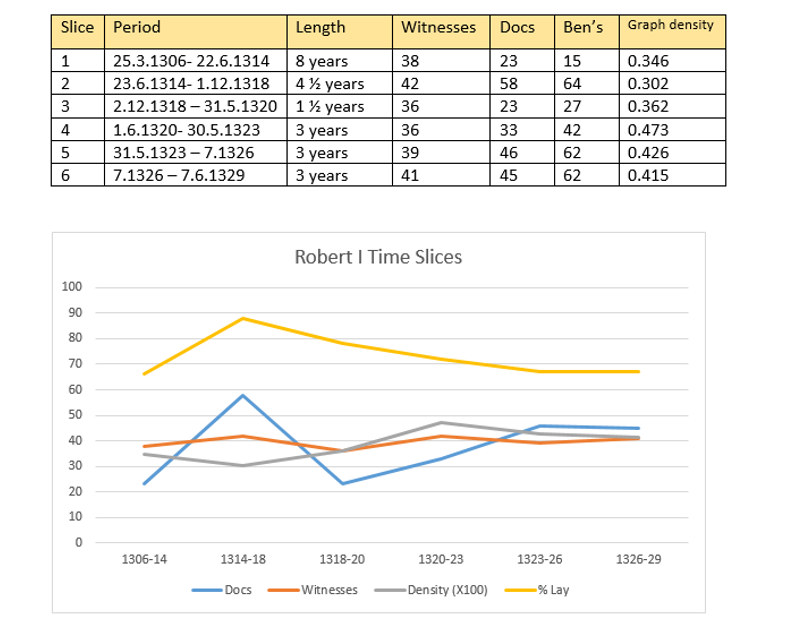 In the following Gephi sociograms of the charter witness networks, the individuals' names are colour-coded. Laymen's names are in blue, while the names of clerics are in light brown or tan (except in time slice 3, where they are green). The size of the names are adjusted according to their degree, or the number of co-witnessing contacts they had. A live interactive version of each graph is available on the People of Medieval Scotland website, and there is a link provided below each sociogram. 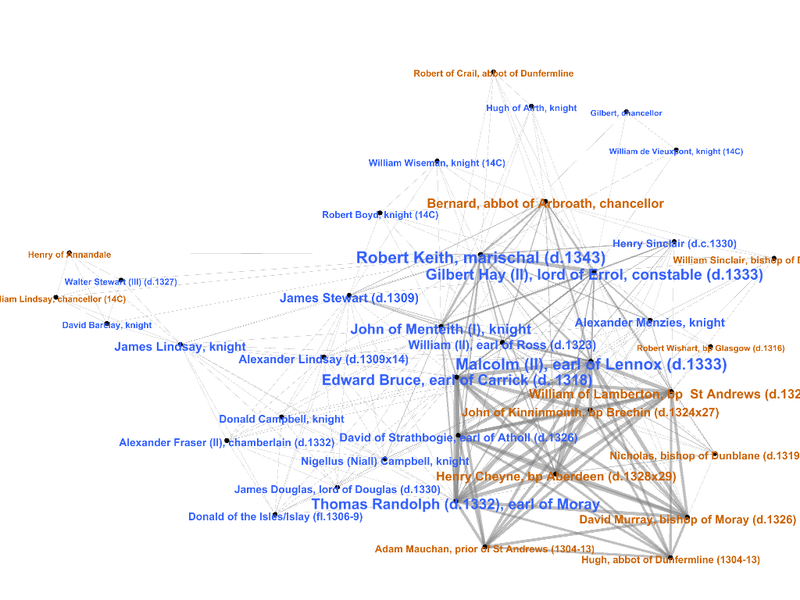 View the interactive visualization of Robert I's witnesses in Time Slice 1 on the PoMS website.

The table above shows the top players in the early part of Robert's reign. The early importance of Malcolm (II), earl of Lennox, is noteworthy, a point bolstered by the fact that the earliest surviving charter of Robert as king was an inspection and confirmation of a Lennox charter (RRS, v, no. 2; H1/53/2). The king's brother, Edward Bruce, was an important player at the king's court in these pre-Bannockburn days, but Robert Keith, the king's marischal, was already asserting his position as the man with the most contacts. 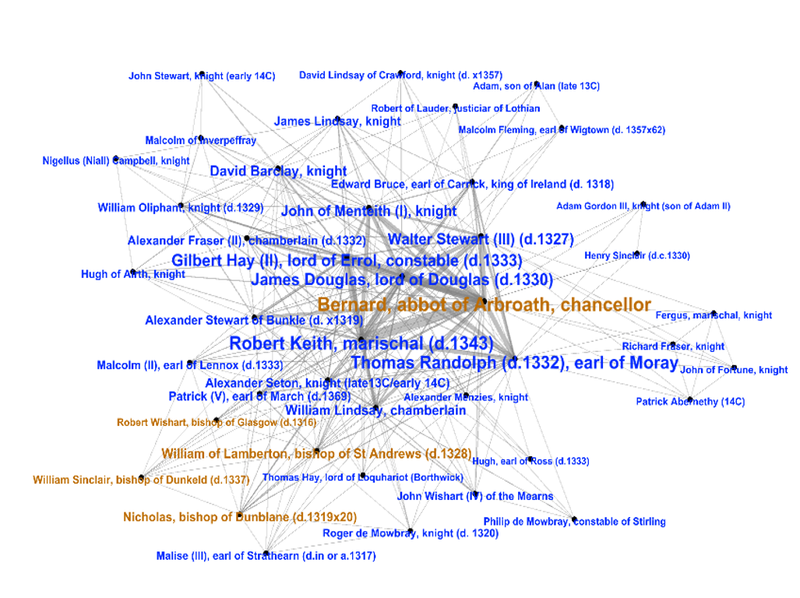 View the interactive visualization of Robert I's witnesses in Time Slice 2 on the PoMS website.

In the period between Bannockburn and the Scone parliament, Edward Bruce has disappeared from the king's court, leading an army in Ireland, and the marischal's top spot has been usurped by the king's chancellor, Abbot Bernard of Arbroath. This is hardly surprising given that this was a very active period for royal charter production. With Robert now in a strong military position, the royal administration was buzzing to life. Already, the top lay actors in the king's court are asserting their close position to the king, with Keith joined by Thomas Randolph, James Douglas, and Gilbert Hay.

Time Slice 3: 1318 Scone Parliament to Newbattle Parliament/ Declaration of Arbroath (December 1318 to May 1320) 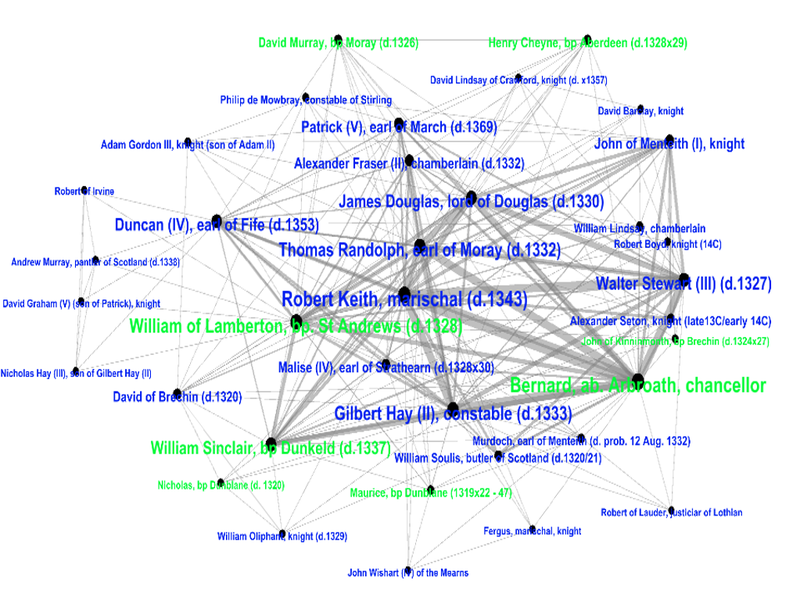 View the interactive visualization of Robert I's witnesses in Time Slice 3 on the PoMS website.

This period is marked by a relative strengthening in position of William Lamberton, bishop of St Andrews, and William Sinclair, bishop of Dunkeld, as well as the earls of Fife and March. The absence of Alexander Fraser, the king's chamberlain from 1319 to 1327, in this table and the following two tables, is striking. 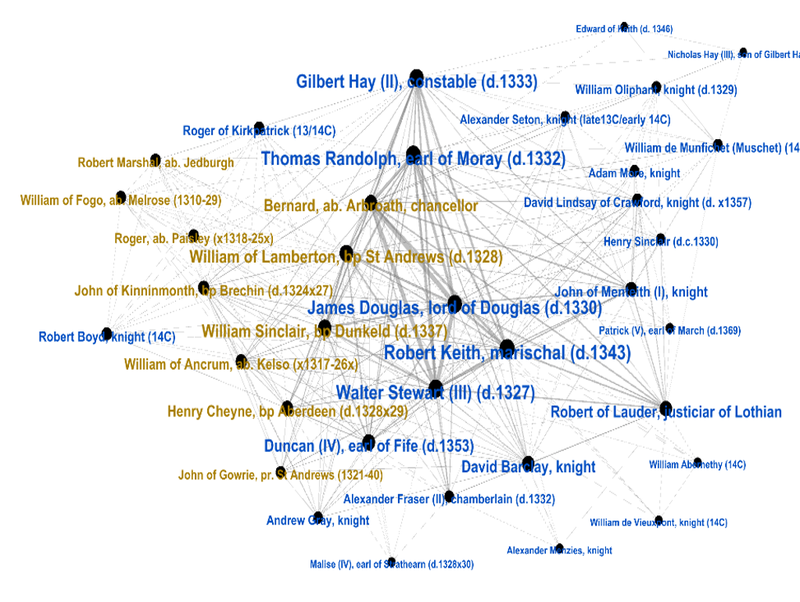 View the interactive visualization of Robert I's witnesses in Time Slice 4on the PoMS website.

The five closest lay allies of the king cement their position in the top five in the charter network between June 1320 and May 1323: they are Keith, Randolph, Stewart, Douglas, and Hay. Abbot Bernard falls to ninth place in the degree rankings although his weighted degree of 130 reveals the fact that he still witnessed a large number of charters with other witnesses in this period. This seems to be due to Bernard's apparent absence from the court in July 1321 (RRS, v, nos. 191, 194) and October 1321 (RRS, v, no. 203) and December 1322 (RRS, v, nos. 213, 214). 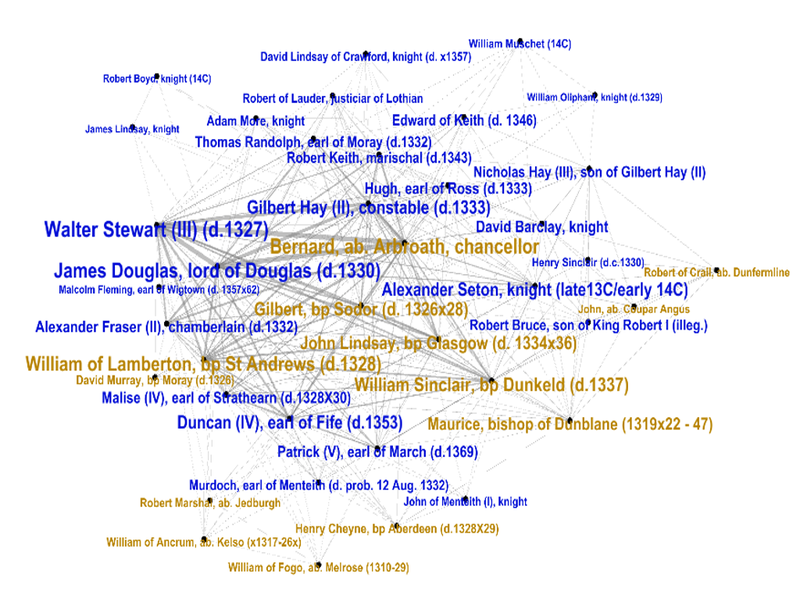 View the interactive visualization of Robert I's witnesses in Time Slice 5 on the PoMS website.

The most remarkable thing about the network of charter witnesses in the the years after the truce with England is the disappearance of the marischal Robert Keith from the 'top ten list'. After holding the number one or number two position for all the previous time slices, the marischal falls to a number 18 ranking by degree in this period. This was due to Robert's absence from the king's court between 26 Dec. 1324 and 20 October 1325. This absence may have been related to Keith's resignation and re-infeftment of his extensive landed estates in East Lothian, Lanarkshire, and Aberdeenshire, in male entail at that 1324 Christmas court. 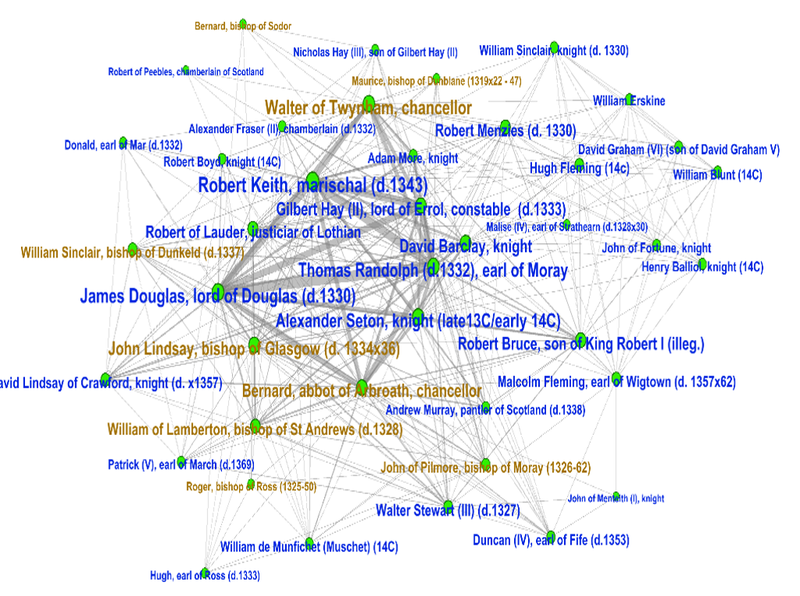 View the interactive visualization of Robert I's witnesses in Time Slice 6 on the PoMS website.

Robert Keith resumes his top spot in the final three years of Robert's reign, and the end of Abbot Bernard's tenure as chancellor in March 1328, by which point he had been elected bishop of the Isles (or Sodor). Walter of Twynham was acting as chancellor by July 1328. Walter Stewart, who had been top of the league tables in time slice 5, is noticeably absent here due to his death in 1327.