CITE THIS PAGE: Matthew Hammond, 'Breaking down David's reign', The community of the realm in Scotland, 1249 -1424: History, law and charters in a recreated kingdom, 21 Nov. 2019, https://cotr.ac.uk/social-network-analysis-political-communities-and-social-networks/networks-david-ii-king-scots-1329-71/breaking-down-davids-reign/

By dividing David's reign into shorter chronological periods, or time slices, we can understand better how his charter witness networks changed over time. David's reign has been broken down into five time slices, with the final slice being further subdivided into four slices. These slices represent the stages of David's life and reign. The first slice comprises the five years between David's accession and his being shuffled away to France for safekeeping; the second represents the seven years between 1334 and 1341 when the young David was in exile in France. There are very few documents, and correspondingly few witnesses during these two slices due to David's minority and the ongoing wars.

The third slice represents David's first period of personal rule, from his return to the kingdom on 2 June 1341 and his capture at Neville's Cross on 17 Oct. 1346. This five years was fairly active: here there are 42 witnesses drawn from 56 documents. The subsequent phase, marked by Robert Stewart's lieutenantship, lasted 11 years, until the 1357 Treaty of Berwick, but was again marked by relatively few witnessed documents. Despite only 19 such sources, the size of the witness network was not much smaller, 34 compared to 42. The final and by far the most active phase of David's reign was his second period of personal rule, the 13.5 years between his release from English captivity and his death on 22 Feb. 1371. As the graph below demonstrates, the number of witnesses stays relatively small despite the huge increase in documents in the final phase. No fewer than 239 witnessed charters survive from this period, which is why it is subdivided into four sub-slices, which are laid out at the bottom of the page. 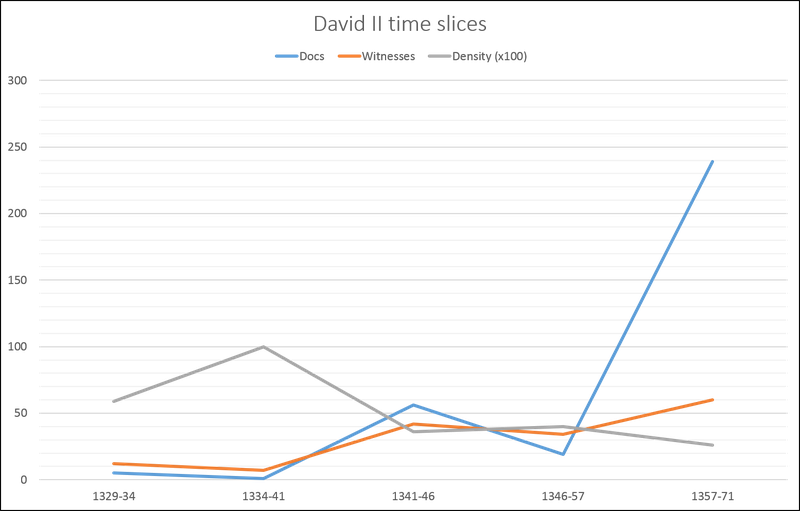 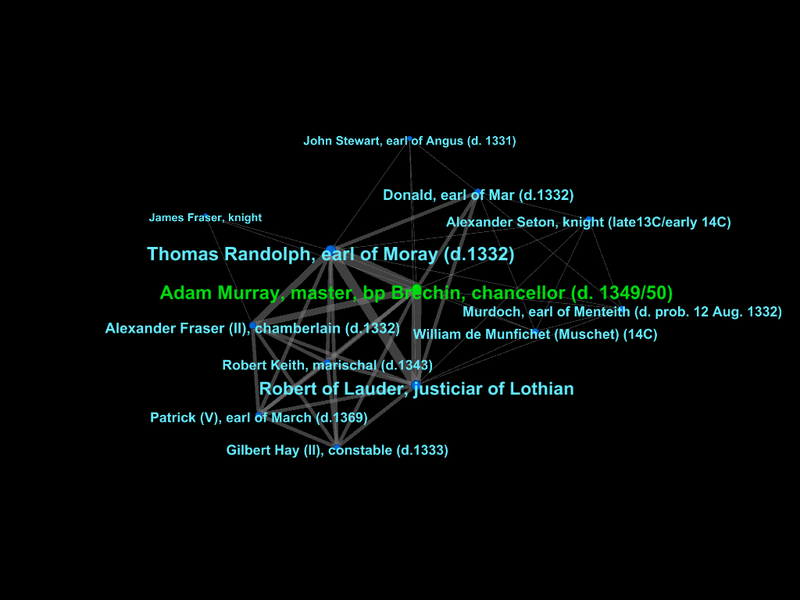 View the interactive visualization of David II's witnesses in Time Slice 1 on the PoMS website.

The early period of David's reign is dominated by holdovers from the reign of his father, King Robert I. While John Stewart, earl of Angus (d. 1331) and Thomas Randolph, earl of Moray and guardian (d. 1332), passed away from natural causes, others died in the wars that followed. The subsequent guardian, Donald, earl of Mar, was killed at the battle of Dupplin Moor on 11 August 1332, along with the chamberlain Alexander Fraser and probably Murdoch, earl of Menteith. 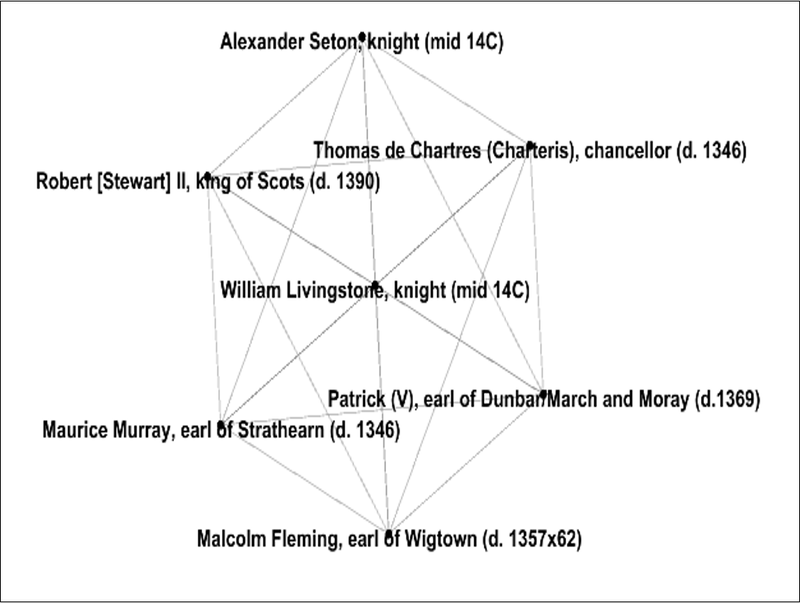 View the interactive visualization of David II's witnesses in Time Slice 2 on the PoMS website.

There is only one witnessed charter in the name of David II to survive from his period of exile in France. The witness list reveals the most important actors from this period, especially Robert Stewart, Earl Patrick of March, Malcolm Fleming and Maurice Murray, future earls of Wigtown and Strathearn, respectively. This charter was dated at Dumbarton castle on 8 May 1340. 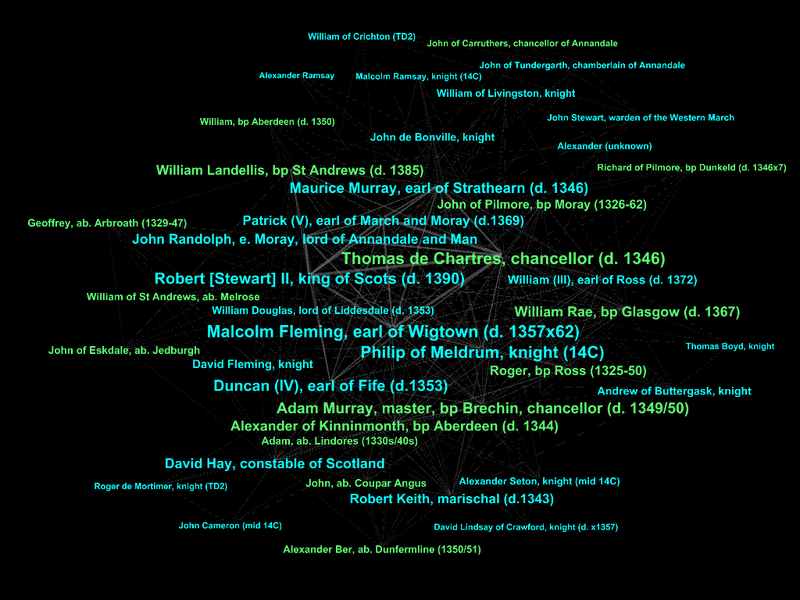 It is interesting to compare this witness network from David's first period of personal rule with the previous two. Robert Stewart's star has fallen, with Malcolm Fleming and Philip Meldrum. Fleming's support was rewarded with a new earldom, that of Wigtown, in 1341. Thomas Charteris continues as chancellor. Duncan, earl of Fife is active here, and Maurice Murray is still around, acquiring the earldom of Strathearn in 1344. David Hay has succeeded his probably grandfather, Gilbert, as constable. David Hay died in the battle of Neville's Cross near Durham on 17 October 1346, along with the the chancellor Thomas Charteris and Maurice Murray. These losses, along with David's capture, ensured the networks in the following time slice would differ again. 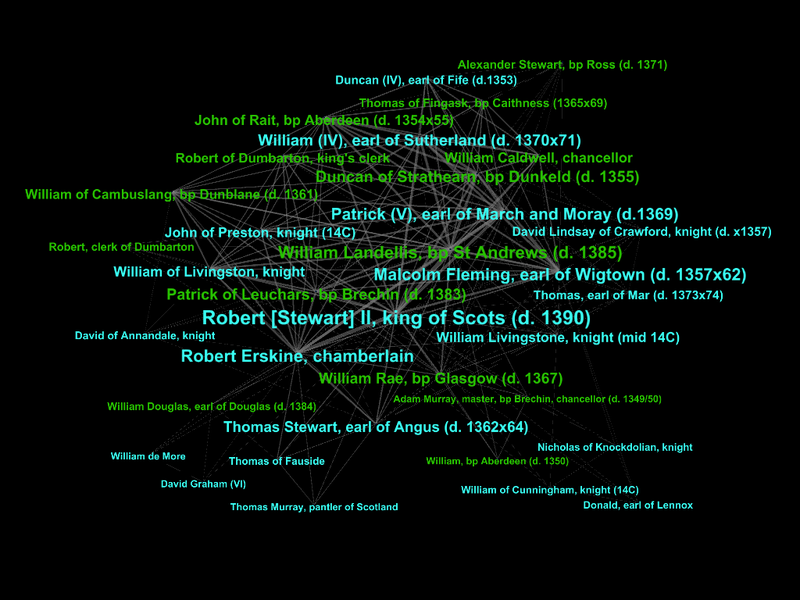 In fact, the above witnessed documents date from between 15 May 1350 and 8 Sept. 1356. Other than the unsurprising ascension of the king's lieutenant, Robert Stewart, to the most central position, the prominent role played by bishops during this period is significant. The appearance of the bishops of St Andrews, Dunkeld, Brechin, and Glasgow in the above table is a testament to this, although other bishops also witnessed charters in this period. The appointment of Patrick of Leuchars, bishop of Brechin, as chancellor in 1353 was an astute move, and he served David loyally in that role through that king's death in 1371. The knight and sometime chamberlain Robert Erskine who rises to prominence in this period would also become a constant presence upon David's return. The appearance of the earls of Fife and March, together with the attestations by the bishops, show the coming together of the community of the realm in the king's absence, as well as the likelihood that charters in the name of the king were only issued at assemblies when a sufficicient number of such figures were present. The importance of the king's brother-in-law, Earl William of Sutherland, is also worth noting. 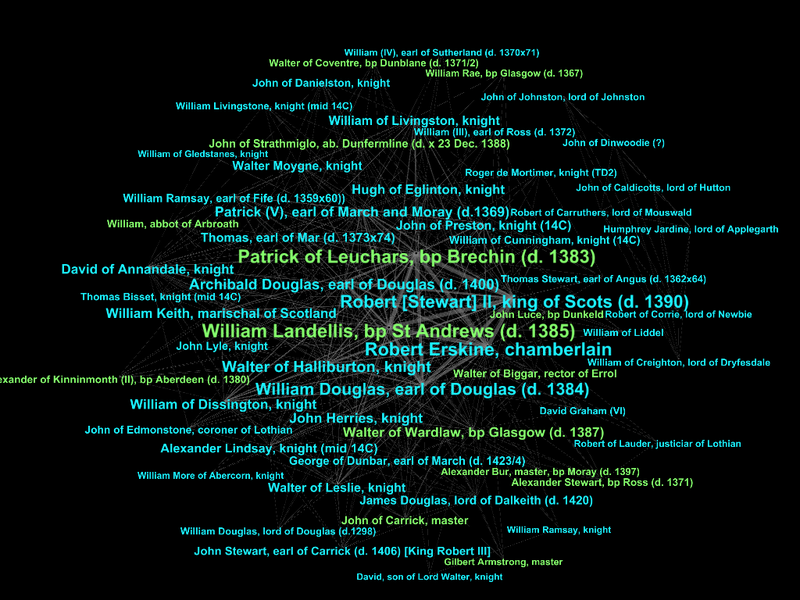 View the interactive visualization of David II's witnesses in Time Slice 5 on the PoMS website.

The bishops of St Andrews and Brechin, along with the knight Robert Erskine, were constant companions of King David during this most active period of his reign. The king's nephew Robert Stewart continues to be an important player at court, but now under the aegis of 'Keep your friends close and your enemies closer'. The rising power of the Douglas family is also clear in this period, with both the powerful William Douglas, made earl of Douglas in 1358, and his first cousin the bastard Archibald 'the Grim' Douglas, lord of Galloway, making their influence felt at court. The omnipresence of household knights at David's court, men like Walter of Halliburton and William of Dissington (or Dishington), is also reflected here. 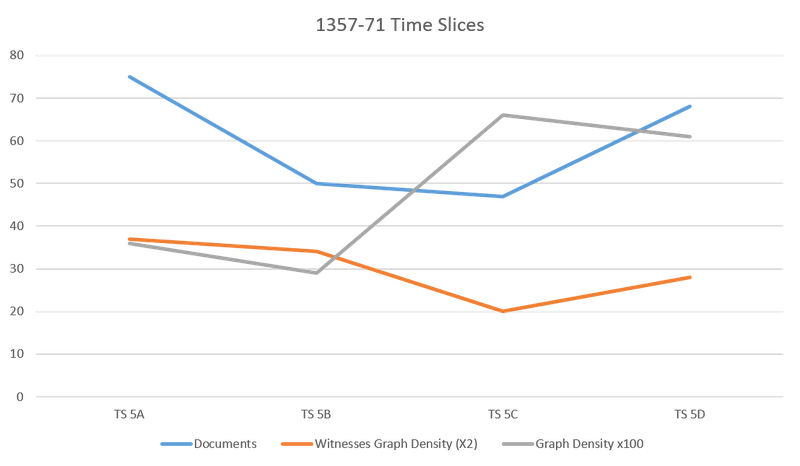 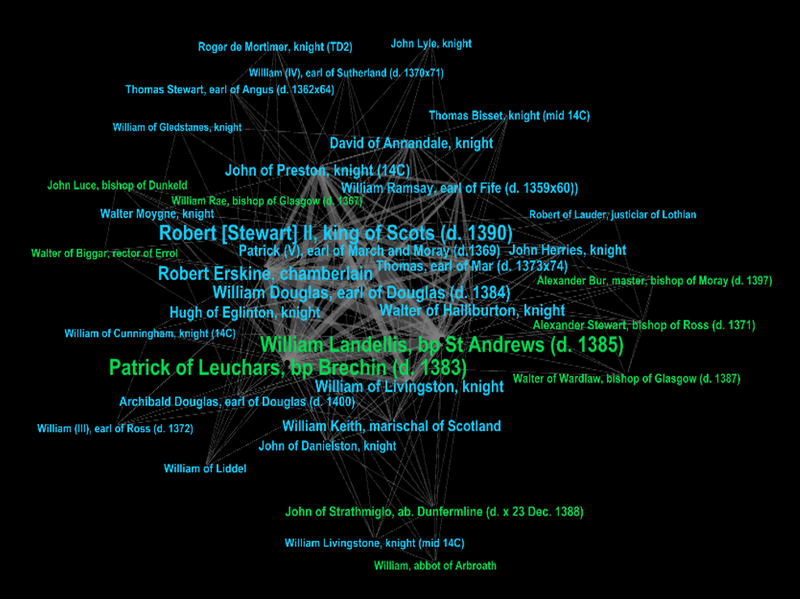 View the interactive visualization of David II's witnesses in Time Slice 5A on the PoMS website.

Table: top ten witnesses in time slice 5A, by degree 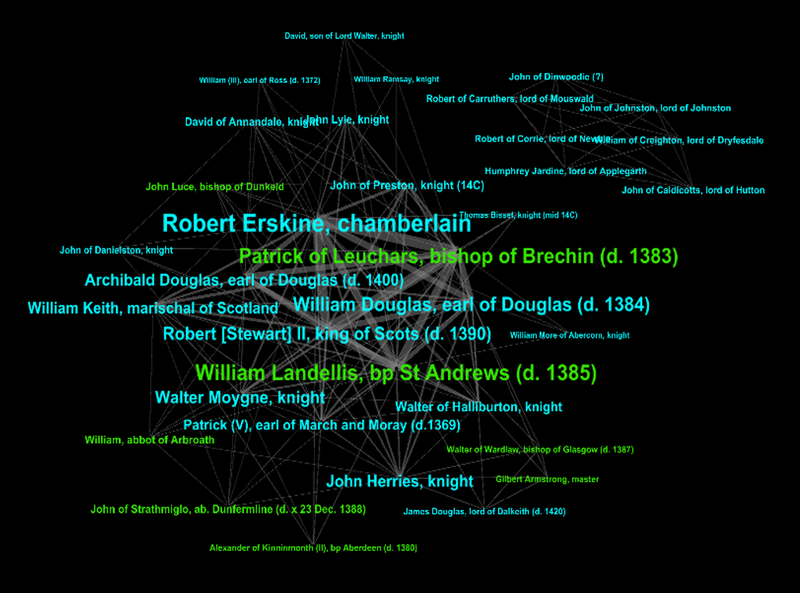 View the interactive visualization of David II's witnesses in Time Slice 5B on the PoMS website.

Table: top ten witnesses in time slice 5B, by degree 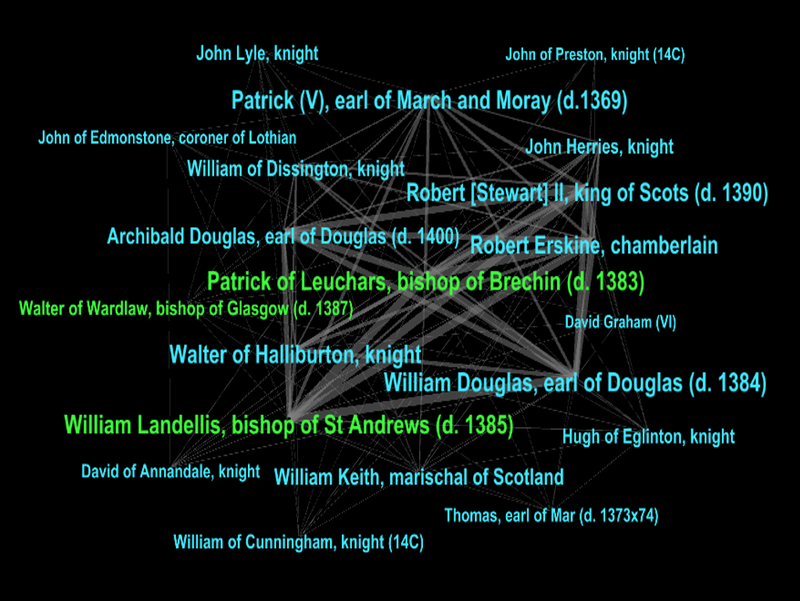 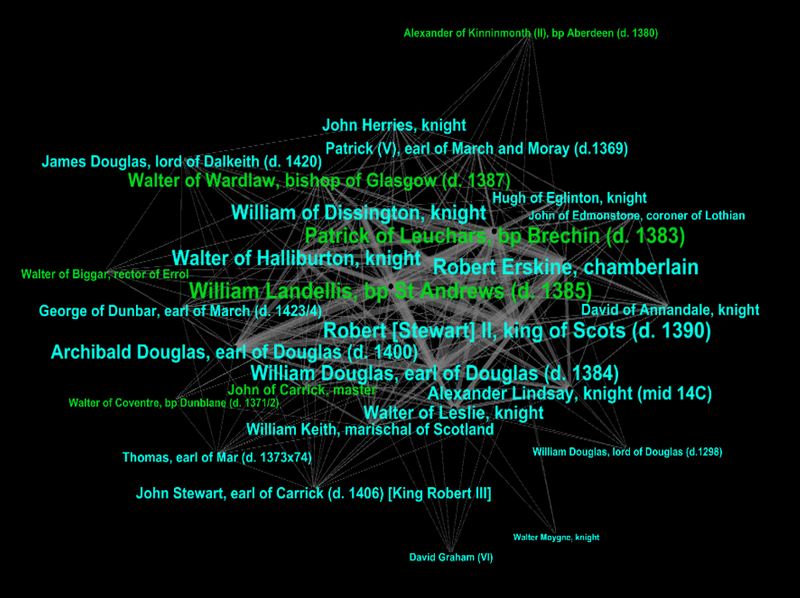