The social networks of the Declaration of Arbroath (1320)

CITE THIS PAGE: Matthew Hammond, 'The social networks of the Declaration of Arbroath (1320)', The community of the realm in Scotland, 1249 -1424: History, law and charters in a recreated kingdom, 21 Nov. 2019, https://cotr.ac.uk/social-network-analysis-political-communities-and-social-networks/social-networks-declaration-arbroath-1320/

The following Gephi sociograms highlight the role played by many of the barons who addressed the letter to Pope John XXII in 1320 (better known as the Declaration of Arbroath) in the network of charter witnesses of King Robert I. The 1320 barons' names are coloured blue. It is immediately apparent that many of the most central lay actors in Robert's court also lent their names to the 'Declaration', including the core group of Robert Keith, marischal; Gilbert Hay, constable; Walter Stewart, steward; James Douglas; and Thomas Randolph, earl of Moray. 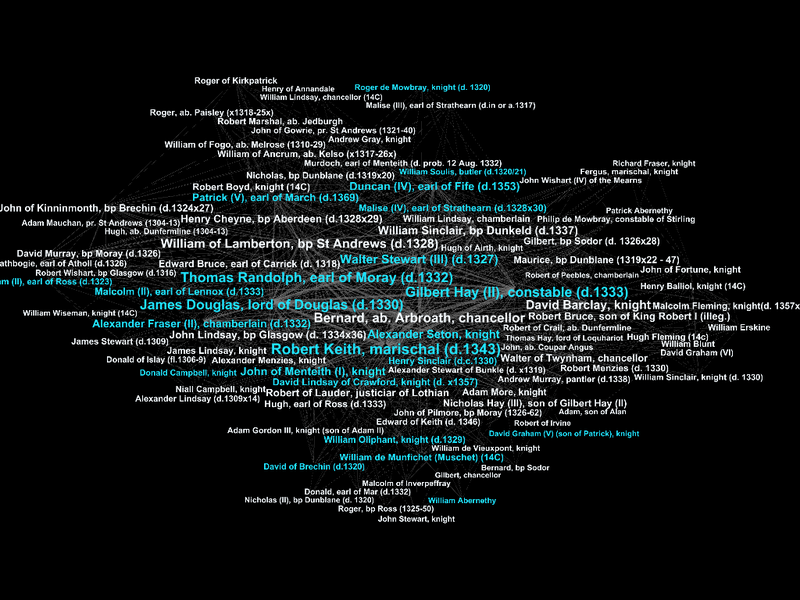 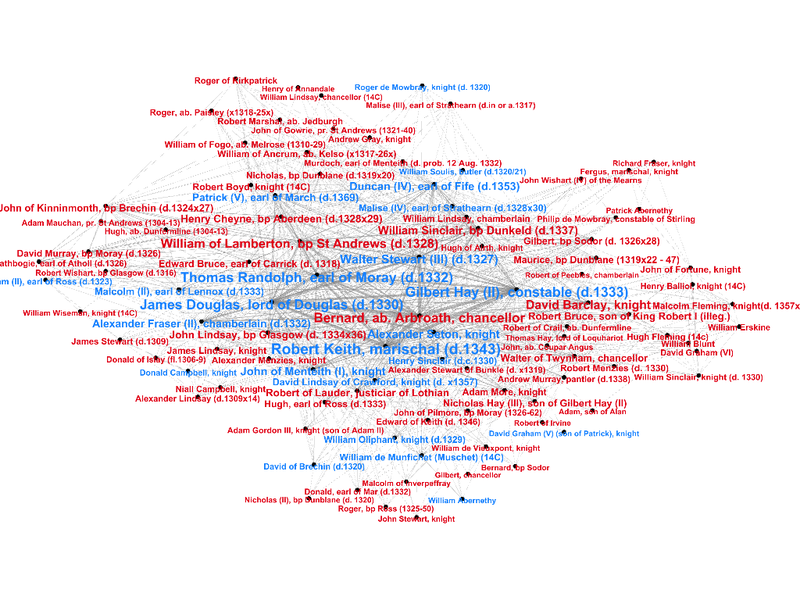 The following table lists the 1320 barons who witnessed Robert I's charters in order of their degree in Robert's witness network. It is noteworthy that William Soulis, Roger de Mowbray, and David Brechin, three men involved in a plot later that year to overturn Bruce's kingship, all appear towards the bottom of the list, with few co-witnessing contacts.

1) listed according to degree (number of co-witnessing contacts)

The following table lists the names of the barons in the order in which their names appear in the letter. This 'order of dignity' accords each baron his high rank according to conventional feelings about elite status. The earls - eight of them - go first, with the earl of Fife given his traditional position at the top of the pack. The historical top trio of Scottish earls of Fife, March (formerly Dunbar) and Strathearn, which had maintained that status for a century and a half, was now joined by the newly created earl of Moray, Thomas Randolph, whose power reached almost viceregal status. The northern earls of Ross, Sutherland and Caithness came at the bottom of the pack. Two royal household officers came next, the stewart and the butler, followed by James Douglas, whose position in southern Scotland was on the ascendant. The following barons were scions of the great aristocratic houses of Scotland, including Graham, Fraser, Hay, Keith, Lindsay, and Oliphant. The inclusion of Henry Sinclair and John Graham, lord of Dalkeith was probably down to the letter being composed at an assembly at Newbattle abbey, neighbouring their estates.

If we compare the letter's order of dignity with the position of the actors in the charter witnessing network of King Robert, we get a very different picture. Most of the earls either do not appear in the witness network at all (Sutherland, Caithness), or held much less prominent positions. Only the earls of Moray and Fife were part of the 'top ten' of charter witnesses according to their degree (number of contacts). By contrast, many of most important players in Robert's witnessing network, and by extension at his court, like James Douglas, Gilbert Hay, and Robert Keith, fall much lower in the order of dignity. On the other hand, the lion's share of the lowest-status barons to appear in letter did not appear as witnesses to Robert's charters at all.

Ego-networks are subsets of the whole network defined according to any one individual player. The density of an ego-network is defined as how many potential ties between their contacts are actualised. In other words, do ego's friends know each other or not? If all of ego's friends know each other, his ego-network has a density of 1, and his position in the network means little, because everyone knows everyone else. If ego has a low density, then ego's contacts do not know each other, potentially setting up ego to act as a bridge or broker: knowledge and influence must flow through ego. For this reason, individuals with low ego-network densities tend to be power-players. The following table lists the 1320 letter barons in order of increasing density. This is another way of demonstrating which barons held the most influential positions in the king's court.

The following sociogram illustrates the ego-network of William Soulis, who led the failed 1320 coup attempt against Robert. As we can see, William appears as a minor player even within his own ego-network. 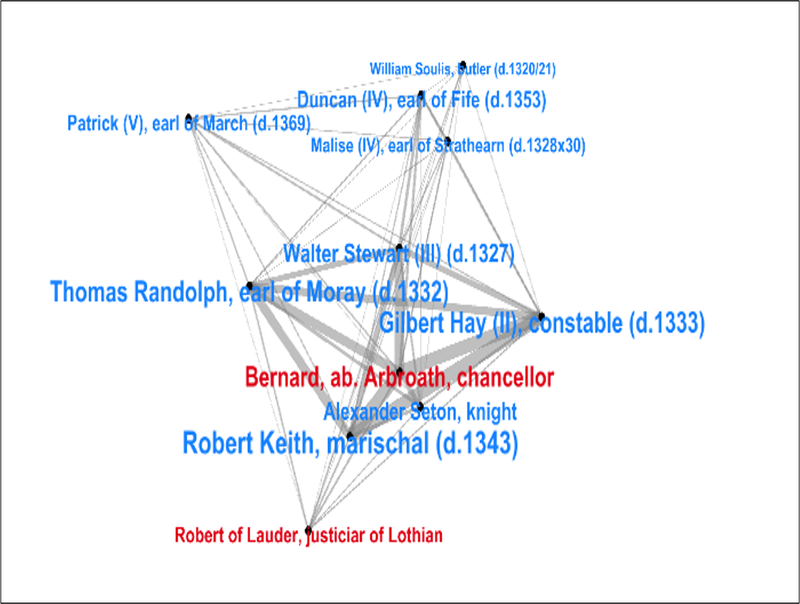